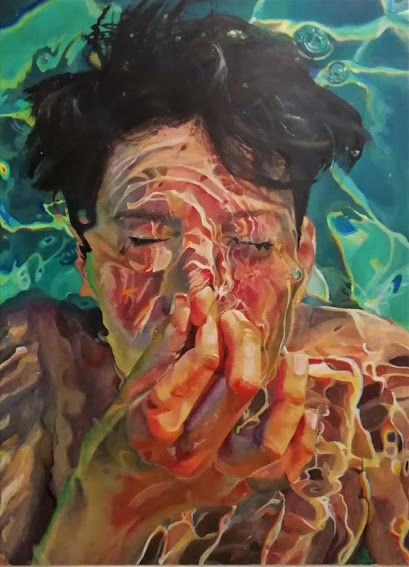 ARTICULATION OF SOLACE FOR W

We are mothering ourselves. We are articulating solace for each other. We are trying

to not fall in love. Write love poems

to not fall in love.

it. Our common language. Our white world. We are trying

to write close to it. Even closer. Closeness

changes. Every poem was once impossible.

in your dream when he is still alive outside it, watching Kurosawa for you. Aliveness

of violence that can be taken back. The room

where someone not deadly realized they could care for you and didn’t. Or did. Now you

imagine it emptied. The kitchen

without a sink, windswept, glazed emerald-gold.

You could picture solace only by bright walls, you said. By, not in. A nearness.

We were listening to Arca together.

We were dreaming about an apartment in the Mesozoic. A meadow on Neptune.

Thinking. This relationship. Between the cold pomegranates on the table and the

porcelain bowl that couldn’t break apart one morning. Solace. I

wanted islands instead of worlds. I wanted a new kind of ice. One to hold on to, lying

like lightning onto my neck so I could be orchards as well. As well

What’s the point of time if we’re never out of it, knocking at your door, in landfall, in

carrying away gorgeous bags of treasure every time we meet. Deadlight. Clearly we

were not who we were. Clearly we were not dead. We were not

I dreamt of my poems grinding your poems into nothingness. I dreamt I read a poem by

you every day for a year and no one I love died that year. The phone

was ringing. The envelope smelled like wild horses. You were about to send it.

us from the street. Turn

on the light in the castle and close their eyes. We don’t know.

And that not knowing loves us. A walk by the Seine. A wall covered in jewels and

keeps getting longer the longer we read.

Part of being-in-relation always belongs to other relations. To cursed futures, rare earth

metals, tremblement. Which is why

I want mine to explode. Be

unreadable with me. Unwritable. Be almost unlivable. Faces flat on the kitchen floor at

dawn. Do not let even one

In every house we lived together the floorboards are rotting, rippling. Ethics

means this poem is possible even if it isn’t innocent. Even if we were. Unless you were

you were crouching by the bathroom’s sharpened mirror. You were impossible,

bitter, biting your tongue. You were cutting out my favourite words from the common

language until the language ended. We eat castles in thin slices, remembrance.

Who has not asked himself at some time or other: am I a monster or is this what it means to be a person?

I was scanning her book for you. I was tearing it apart in the photocopier.

S visits me in Boston. In the poem we write, trading lines, I ask her about the hail in

Tuscany. Knowing she was never there. What

were you like when you were young? This winter I drive to New York and the city is not there.

all week in V’s empty apartment in Queens. When I walk past her mirror my face

keeps reflecting in front of me. Like something I could catch. Those are the moments

when I can feel something dissolving

are years as well. Years I give to you.

This year, all year, never have I wanted more to wear necklaces inside necklaces. Never

have I wanted more to just think and study on the windy carpet. Never

have I been less able to.

Thinking, since we are in a room with four walls, does this mean each wall is a chamber

of the heart. Does this mean it’s not a nightmare. All year

I was thinking of J’s apartment back in Ithaca. But filled with rainforest and Christmas

lights. Satin blouses. We can barely see it but everyone they love

is climbing through the trees. We will not catch any of them. Like snow on the sun, at

night. Like, I wanted to explain to J: it isn’t

an image of disappearance. Of sleeping alone in the kitchen window. I would not

imagine disappearance in a single

A, who I loved so long ago, texts me all of a sudden. I miss you. It’s been two years. It’s

been a kind of reaching. The spaceship we once talked about, from SOLARIS, flooding with hail, has been crashing

through every draft of every text he’s ever sent. Like

Will we ever live in a house together. Will we ever shower each other upside-down, radiant with hurry? Will we?, Will we ever?, though I know this is the only thing the word “house”

could ever mean. I was looking for you. You. Not

the you of this poem. Not any of the yous of the poem. The you I sneak away with while

the poem descends into underworlds, eating pollen and seams. Hailstorm,

while I stare at my own face in the mirrors of friends, trying to map out the part

for the moon and the part for the bonfires. La Luna e i Falò. The part for life and the

part for the secret life. For world and for loneliness. Katabasis — it’s taken me

so long to put this poem together. You wouldn’t believe me. I’m trying

so hard to look for you without using you at all. Using

only the positions and momentums of all the other people I love, not the rain pouring

two doors into the dream.

means it’s real. You can touch it when I look away. I can see how the dark folds in half

beside you. It’s a different texture. A different shirt I have to sew through. The diagonal light,

in vertical furrows. Of course I can barely remember your face

before I remember your face.

is a poet based in Cambridge, MA, where they are studying for a PhD in Film and Visual Studies at Harvard. Recent work has appeared in journals including NASHVILLE REVIEW and POETRY NORTHWEST. They were born in Beijing and grew up in East Tennessee
MAY 2021
THE WHITE REVIEW