﻿ ﻿ ﻿ biography
By Triunfo Arciniegas
Translated by Anabel Torres
With his top as a pencil
A little boy scribbles on the dust
The history of his life. 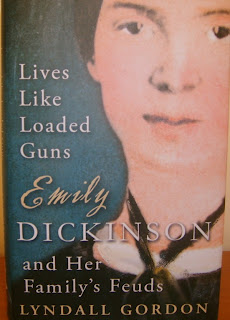 Emily Dickinson
by Lyndall Gordon
This is a biography of Emily Dickinson that goes further than any previous biography. As well as an enthralling account of the life of the poet, Lyndall Gordon has explored the vicious family feuds that began even before Emily Dickinson’s death & intensified afterwards. The life is well-known. Emily Dickinson lived a secluded life in her father’s house in Amherst, Massachusetts. I think she wrote the most extraordinarily original poetry of the 19th century. I loved her poetry as a teenager & although I hadn’t read her recently, as soon as I picked up this book, lines came back to me. As a teenager, her poems about death fascinated me. I felt a funeral in my brain; I heard a fly buzz when I died; Safe in their alabaster chambers; I died for Beauty but was scarce adjusted in the tomb. My copy of the poems has lines marked everywhere. The metaphors reminded me of the metaphysical poets like Herbert & Donne. The props assist the house until the house is built; My life had stood, a loaded gun. She had a rigorously Puritan education, studied the sciences & all this comes through in the work. The unconventional punctuation, the capitalization & dashes, was so radical at the time that it wasn’t until the 1950s that an edition was published with the original punctuation. Lyndall Gordon also has an interesting theory about the cause of Dickinson’s seclusion. One of the enduring myths is of the New England nun, flitting around the house in a white dress, coyly avoiding visitors. The conventional explanation is an unhappy love affair. Gordon has some compelling evidence that Dickinson may have suffered from epilepsy, which was seen as a shameful mental illness in the 19th century. The incurable, random nature of the symptoms of epilepsy could have left Dickinson reluctant to be seen much in public & the effects could also explain some of the striking images of psychic disturbance in her poetry. The fact that we have so much of Dickinson’s poetry at all is due to the efforts of her family as only a few poems were published during her lifetime & they had been tidied up by fussy editors. Reading about the feuds, the adultery, attempted fraud & bad feeling that erupted between two branches of the family in the century after Dickinson’s death makes me wonder how the work survived at all. It began with Dickinson’s brother, Austin’s, affair with a young woman, Mabel Loomis Todd, whose husband was a faculty member at the Amherst Academy. Austin Dickinson was Treasurer there & Mabel’s husband, a philanderer himself, seemed content for his wife to have an affair with a powerful man to further his own career. Austin was completely besotted with Mabel & removed himself emotionally from his wife, Sue, & their children. Austin & Sue lived next door to his sisters, Emily & Vinnie. The affair was conducted at his sisters’ house & caused divided loyalties from the start. Emily sided with Sue, her girlhood friend & most perceptive early reader. Vinnie sided with her brother. Mabel fancied herself as a discoverer of genius & although she never met Emily, she recognized the worth of her work when first Sue, then Vinnie showed her the poems. She undertook to edit a selection of the work after Dickinson’s death. She did an admirable job, although she tidied up the punctuation & added titles. The poems were an immediate success & Sue, who had still more poems in her possession, wanted to stop Mabel & edit her own selection. Mabel was a great plotter; she wanted Sue out of the way & her relationship with Austin legitimized. When her plans failed, she tried to get hold of some Dickinson land from Vinnie after Austin’s death & this led to accusations of fraud & a lawsuit. I couldn’t admire Mabel, but, she ensured that the poetry would survive. Then, the accusations & bitterness were carried on to the next generation - Mabel’s daughter, Millicent & Sue’s daughter, Mattie – each determined to uphold her mother’s reputation. Lyndall Gordon has done a wonderful job of putting together a coherent story from such tangled events. It’s impossible to summarise it & I feel I’ve done a poor job of it here. If you feel confused but intrigued, just read the book.

A BOOK
By Emily Dickinson
There is no frigate like a book
To take us lands away,
Nor any coursers like a page
Of prancing poetry.
This traverse may the poorest take
Without oppress of toll;
How frugal is the chariot
That bears a human soul!

Emily Dickinson / The Hope Is The Thing With Feathers 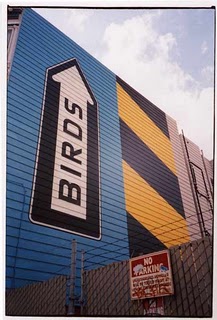 And sweetest in the gale is heard;
And sore must be the storm
That could abash the little bird
That kept so many warm.

I've heard it in the chilliest land
And on the strangest sea;
Yet, never, in extremity,
It asked a crumb of me.