Posted by Ficciones at Thursday, August 31, 2017 No comments:

They are few; but they are . . . They open dark furrows
in the fiercest face and in the strongest side.
Maybe they could be the horses of barbarous Attilas;
or the black heralds Death sends us.

They are the deep abysses of the soul's Christs,
of some revered faith Destiny blasphemes.
Those gory blows are the cracklings of a bread
that burns-up on us at the oven's door.

Posted by Ficciones at Tuesday, August 29, 2017 No comments:

Poem of the week: Epilogue by Robert Lowell

Poem of the week: Epilogue by Robert Lowell

Lowell casts a critical and concerned eye over the failures of poetry – but his masterful, free-ish verse answers the question of why the form matters at all
Carol Rumens
Monday 28 August 2017 10.00 BST


why are they no help to me now
I want to make
something imagined, not recalled?
I hear the noise of my own voice:
The painter’s vision is not a lens,
it trembles to caress the light.
But sometimes everything I write
with the threadbare art of my eye
seems a snapshot,
lurid, rapid, garish, grouped,
heightened from life,
yet paralysed by fact.
All’s misalliance.
Yet why not say what happened?
Pray for the grace of accuracy
Vermeer gave to the sun’s illumination
stealing like the tide across a map
to his girl solid with yearning.
We are poor passing facts,
warned by that to give
each figure in the photograph
his living name.

Epilogue is my favourite Robert Lowell poem from his later work. Included in his New Selected Poems, published in celebration of his centennial year, the poem originally appeared in his final volume, 1977’s Day by Day. In its obsession with poetic technique and purpose, it seems like the work of a much younger writer, yet it possesses an easy mastery, a light touch despite the anguished questions. The main clue to its character as an epilogue and valediction to his life’s work, is the gentle warning note Lowell strikes at the end – he resolves the questions and movingly brings the weight of poetry’s central act of naming to bear on the ethical task of valuing the individual life.
Lowell named many “living name(s)” in the course of his work. He was famously reprimanded by his friend Elizabeth Bishop for his appropriation of personal material, such as letters. He was both praised and derided as a “confessional” poet, and perhaps, to some extent, Epilogue mounts the case for the defence.
In an interview with Ian Hamilton in the Review, Lowell addressed the issue of poetry as reportage in terms relevant to this week’s poem. “I hoped in Life Studies – it was a limitation – that each poem might seem open and single-surfaced as a photograph … It’s severe to be confined to rendering appearances. That seems the perfect way, what War and Peace is, but it flattens poetry’s briefer genius … Sometimes free verse is like breathing naked air, and living only on it.”

In the free-ish verse of Epilogue, Lowell solves the problem, as he saw it, of “flattening.” The structure is complex, revolving the events of a mind in a swirl of mixed-beat, metrical and off-metrical rhythms. Paradox interlaces the defence. There’s nothing “single-surfaced” about its shifts and sleights.
A four-beat line is often favoured, but there are also crisp, brilliantly pointed dimeters and at least two in pentameter. Lowell likes to interrupt his own motion towards metrical regularity with some throwaway speech-rhythm (in lines 1-3, for instance). The diction’s characteristic flexibility mingles the simple and demotic (“I want to make…”) with the richly literary – “rapid, lurid, garish, grouped / heightened from life / yet paralysed by fact”).
Lowell wants “to make / something imagined, not recalled”. But he prods at this with “why not say what happened?” and expanding this line of defence, he introduces the Dutch painter, Vermeer. My guess at the picture he refers to is Woman in Blue Reading a Letter. Notice the use of the possessive pronoun: “his girl” could be read as hinting at a relationship between Vermeer and his subject closer than that of artist and model. It enhances the reading of the painting as personal document. Lowell, of course, was known for writing to, and about, “his” women.

The poem’s draft, seen here with Saskia Hamilton’s analysis, unveils the mystery of the italics: those words are Lowell’s own. Every line in the draft is underlined, indicating italicisation (perhaps the poet knew he’d be worth quoting). Hamilton points out the alteration from “eye” to “vision”, an amendment which might arouse a reader’s quibble, rhythmic or otherwise. I favour “painter’s vision” as richer and more ambiguous than “painter’s eye”.

The poem worries and grieves for poetry’s failure of vision, or perhaps for what Lowell fears is his own myopic weariness; despite plot and rhyme, “All’s misalliance”. The despair may be political and public as well as artistic and personal. That short line is a cry of Shakespearean intensity.

Despite the reference to “the noise of my own voice”, no note of self-pity is sounded. Lowell is not entirely sombre in mood, either; besides the rhythmic play there’s intellectual mischief. Keeping his finger on the dangerous wood of “fact”, he teases its very solidity by centring on elusive qualities like light, grace, yearning. Subtly, Epilogue makes its pitch for “accuracy” including a bow to transcendence. The old discord between light as physical illumination and visionary enlightenment isn’t resolved, but is maintained in beautiful balance. Art can keep faith with “what happened”, but can’t merely narrate or describe. Lowell’s work in all forms demonstrates this. The free verse of Life Studies is fully dimensional, because its rhythms and language are so fantastically textured and alive.

The bigger question of why poetry matters is answered by Epilogue in some of the most humanly resonant lines in 20th-century poetry: “We are poor passing facts / warned by that to give / each figure in the photograph / his living name.”
• New Selected Poems by Robert Lowell, edited by Katie Peterson, is published by Faber and Faber (£14.99, paperback)
THE GUARDIAN

Something there is that doesn't love a wall,
That sends the frozen-ground-swell under it,
And spills the upper boulders in the sun;
And makes gaps even two can pass abreast.
The work of hunters is another thing:
I have come after them and made repair
Where they have left not one stone on a stone,
But they would have the rabbit out of hiding,
To please the yelping dogs. The gaps I mean,
No one has seen them made or heard them made,
But at spring mending-time we find them there.
I let my neighbour know beyond the hill;
And on a day we meet to walk the line
And set the wall between us once again.
We keep the wall between us as we go.
To each the boulders that have fallen to each.
And some are loaves and some so nearly balls
We have to use a spell to make them balance:
"Stay where you are until our backs are turned!"
We wear our fingers rough with handling them.
Oh, just another kind of out-door game,
One on a side. It comes to little more:
There where it is we do not need the wall:
He is all pine and I am apple orchard.
My apple trees will never get across
And eat the cones under his pines, I tell him.
He only says, "Good fences make good neighbours."
Spring is the mischief in me, and I wonder
If I could put a notion in his head:
"Why do they make good neighbours? Isn't it
Where there are cows? But here there are no cows.
Before I built a wall I'd ask to know
What I was walling in or walling out,
And to whom I was like to give offence.
Something there is that doesn't love a wall,
That wants it down." I could say "Elves" to him,
But it's not elves exactly, and I'd rather
He said it for himself. I see him there
Bringing a stone grasped firmly by the top
In each hand, like an old-stone savage armed.
He moves in darkness as it seems to me,
Not of woods only and the shade of trees.
He will not go behind his father's saying,
And he likes having thought of it so well
He says again, "Good fences make good neighbours." 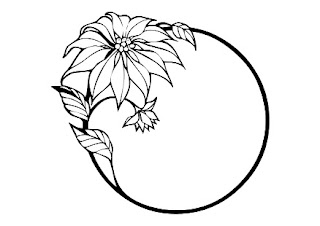 Poem of the week

This week, something from Robert Frost.

Good afternoon, poetry fans. Let me begin by apologising for the tardiness of today's blog - it's been ridiculously busy here since I got in this morning. Another weekend would be very welcome at this point ...

It was with not a little relief, therefore, that I finally turned to today's poem, Mending Wall by Robert Frost, nominated by joedoone, who says of Frost, "he has always been one of my favourite poets, ever since I came across Stopping By Woods On A Snowy Evening at school. I love the way he writes about the physical world, making it seem both fresh and timeless, and Mending Wall is one of his best."
I'm inclined to agree. I've always found Frost's poetry soothing; his spare, clean New England landscapes join with the lilt of his lines and encourage the reader to slow down, listen and reflect. In this poem, Frost uses the image of the boundary wall - forever disintegrating, forever being rebuilt - to explore the paradox created by our desire to protect ourselves and our simultaneous longing for connection. The image is such a simple one that in the hands of a less skilled poet it would almost certainly have drifted into banality; Frost, however, sustains it effortlessly, turning its simplicity into a virtue. Here it is, in full. 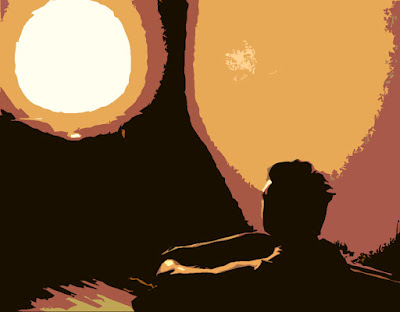 Millions were dead; everybody was innocent.
I stayed in my room. The President
Spoke of war as of a magic love potion.
My eyes were opened in astonishment.
In a mirror my face appeared to me
Like a twice-canceled postage stamp.

I lived well, but life was awful.
there were so many soldiers that day,
So many refugees crowding the roads.
Naturally, they all vanished
With a touch of the hand.
History licked the corners of its bloody mouth.

On the pay channel, a man and a woman
Were trading hungry kisses and tearing off
Each other's clothes while I looked on
With the sound off and the room dark
Except for the screen where the color
Had too much red in it, too much pink. 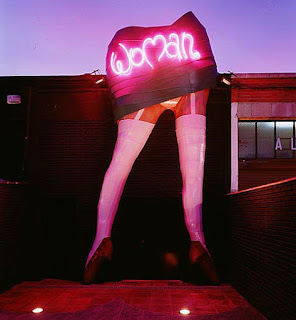 
I liked my little hole,
Its window facing a brick wall.
Next door there was a piano.
A few evenings a month
a crippled old man came to play
"My Blue Heaven."


Mostly, though, it was quiet.
Each room with its spider in heavy overcoat
Catching his fly with a web
Of cigarette smoke and revery.
So dark,
I could not see my face in the shaving mirror.


At 5 A.M. the sound of bare feet upstairs.
The "Gypsy" fortuneteller,
Whose storefront is on the corner,
Going to pee after a night of love.
Once, too, the sound of a child sobbing.
So near it was, I thought
For a moment, I was sobbing myself.

Posted by Ficciones at Tuesday, August 08, 2017 No comments: