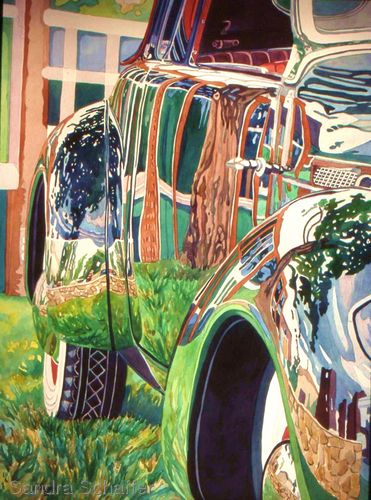 The parched pasture
passing my window
isn’t empty;
the shadow cast
by the lone willow
isn’t shadow merely:
a herd of black cattle
has pooled there
like ink in a bottle,
has remade for itself
out of the glare
a deeper shade.

Posted by Ficciones at Saturday, March 10, 2018 No comments: 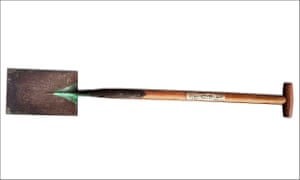 Ray Bradbury wrote of George Bernard Shaw’s spade: ‘The ghost of Shaw climbs up through me’

A spade once owned by the Irish playwright George Bernard Shaw, which was hymned in verse by a subsequent owner, Ray Bradbury, will be auctioned in Los Angeles later this week.


Bradbury, a lifelong fan of Shaw’s, was given the spade as a Christmas present. Shaw had used the tool to plant a mulberry tree on his 80th birthday, in 1936. In the lengthy, unpublished poem, titled GBS and the Spade, Bradbury wrote of how, holding it, he could feel the Nobel laureate’s influence:

I hold the dear spade in my hands,


Its vibrant lightnings strike and move along my arms,
The ghost of Shaw climbs up through me
I feel a fiery brambling of chin
I feel my spine
Stand straight as if a lightning bolt had struck
His old voice whispers in my ear, dear boy
Find Troy, go on, dig deep, find Troy, find Troy!

The Fahrenheit 451 author, who died in 2012 at the age of 91 and left some of the most acclaimed science fiction of the 20th century, had spoken many times of the influence Shaw had on his writing. In Steven Aggelis’s Conversations With Ray Bradbury, he said Shaw was the one person he would choose to interview, describing him as “the greatest playwright of our century”, and adding: “There was no one anywhere near him when it came to playwriting.” 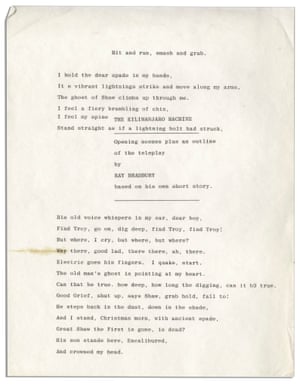 
Shaw won the Nobel prize in literature in 1925, “for his work which is marked by both idealism and humanity, its stimulating satire often being infused with a singular poetic beauty”.
The spade bears a plaque reading: “With this spade Bernard Shaw planted a mulberry tree in the public garden in Great Malvern on his 80th birthday, the 26 July 1936. He then presented it to Harry Batchelor Higgs, his gardener and faithful friend for 34 years’’. It will be auctioned online by Nate D Sanders on 25 September, alongside other items from the Bradbury estate, including a large collection of art owned by the late author. Bids for the spade are to open at $5,000 (£3,000).
THE GUARDIAN