Kay Ryan / A Poet Traces Her Personal Obsessions, in Prose 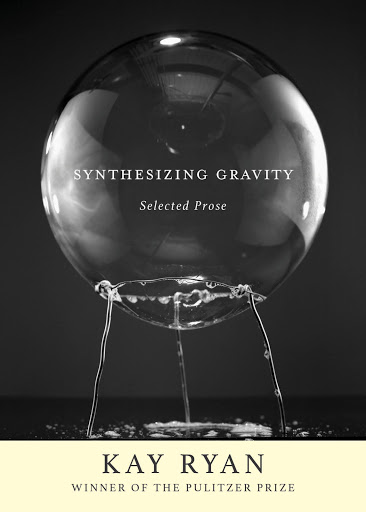 A Poet Traces Her Personal Obsessions, in Prose

There’s something tricky about publishing a poet’s prose. It’s not that poets lack the native ability to write essays or reviews or memoirs — they’re generally as well equipped to do so as fiction writers, many of whom aren’t shy in entering unfamiliar arenas. But prose and poetry, although often portrayed as binary stars exerting equal force, are in fact more like a vast planet and its tiny, clinging moon.

Most of humanity lives in the forests and cities of prose, but a poet spends her days amid frigid gray rocks with only the occasional company of other poets. The journey from this remote territory is long, and the change in customs is extreme, which is perhaps why so many books of “selected prose” by poets are loaded with mystical bombast — the kind of posturing you’d expect from people not really comfortable in a new terrain. It’s also the reason that when we pick up a poet’s prose, we expect it to tell us about that mysterious idiom, poetry. “How marvelous that you speak this extraordinary language,” we say. “Could you sum it up for us in plain English?”

If anyone could manage this task, it should be Kay Ryan, whose “Synthesizing Gravity: Selected Prose” has just been published. Ryan is one of America’s most decorated poets — she’s received the Pulitzer, among other glittery knickknacks — but she came to prominence late; her first book to be widely reviewed, “Elephant Rocks,” was published in 1996, when she was over 50. She doesn’t have an M.F.A. or Ph.D. (the driver’s licenses of the poetry world), and she’s never taught creative writing. All poets consider themselves outsiders, but even the island of misfit toys has its fringier characters, and for much of her career Ryan was one of them. “I have always understood myself to be a person who does not go to writers’ conferences,” she writes. This is a sentiment most human beings can surely endorse, but it’s not the norm in the land of sestinas.

Ryan’s poetry is itself an exception to current conventions, as it avoids overt personal or political references in favor of warped takes on everyday sayings (“Home to Roost”), uses larky internal rhymes that work like the springs inside a mattress — “bounce” is the kind of word that seems appropriate to a good Ryan poem — and flirts pretty heavily with light verse. “Silence” is typical:

Silence is not snow.
It cannot grow
deeper. A thousand years
of it are thinner
than paper. So
we must have it
all wrong
when we feel trapped
like mastodons.

This doesn’t look at all like the typical contemporary American poem, and yet it’s remarkably nimble and memorable. These observations may not be unrelated.“Synthesizing Gravity” is a delight, if a tart and idiosyncratic one. The book is divided into four sections, more or less keeping to a theme (essays on general subjects, essays and reviews of individual writers, etc.). There is no mystical bombast here whatsoever. Indeed, there is very nearly the opposite, delivered by a writer with a full command of the English sentence and an electric talent for metaphor. As in: “Almost any random poem by a great poet can become your private key to their Enigma machine; although the Enigma machine keeps spitting out different daily codes, you will sense the same deep gizmo behind it.” Note the cheeky, unpretentious excellence of “gizmo.” Or (in one of the few essays not having to do with poetry): “There is always a feral scent to Annie Dillard’s writing, and always a little spatter of blood — from birth, the kill, the dissection, the thorn of the rose.” Note “spatter” rather than the clumsier “splatter,” and the carefully delayed “thorn of the rose.”

Ryan’s touchstone poets are those you’d expect from her own poems — Frost, Dickinson, Marianne Moore, Philip Larkin, Stevie Smith. She’s a keen reader of each of them, particularly Smith, whose deliciously loony, merrily hostile writing has bewildered many a Serious Reader of Poetry. Here is Ryan on her unique appeal: “Call her childlike, or childish; say that it is unattractive for a grown woman to steal the good stuff out of the tea sandwiches; but add that her method of getting along was sustainable, that her solitary stand, her combination of fierceness and indecision, her tweaking of demons’ beaks, continued to nourish as well as any of the more familiar modes.” This seems exactly right (and Smith would have loved “demons’ beaks”). Nor is Ryan reluctant to call attention to the clay on the boots of her heroes. On the ostentatiously combative Frost: “The constant black hat can get to be a tiresome pose. It’s as though the suspicious part of Frost saw every beautiful thing that he was capable of as a rock to throw.”

Ryan has all of a critic’s skills, but this isn’t a critic’s book. That’s not a put-down but an observation. The prose of a true poet-critic — Randall Jarrell is the classic example — engages with a wide variety of writers, styles, problems and pleasures; it provides a window on the art for new readers (perhaps not the widest window, but even so). “Synthesizing Gravity,” however, is a poet’s book about poetry, and a fairly circumscribed one at that. The same figures recur. The same lines recur. Frost’s tiny poem “A Dust of Snow” is discussed not once but twice, yet you will search in vain for any substantial analysis of Auden or Plath, to say nothing of the poems of any living writer whatsoever.

This can be frustrating, especially since Ryan is such a strong thinker and writer. Certainly you don’t expect her to spend any time on, say, Charles Olson, whom she probably read in embarrassed silence, if she’s read him at all. And while it would be interesting to see her thinking on Ashbery, you don’t expect it. But there are long essays here on Frost and Marianne Moore, so it seems odd to see nothing on Elizabeth Bishop, who is the most prominent heir to these writers, and whose work is both a complement and a challenge to Ryan’s approach.

Yet if Ryan gives us a view through a keyhole, it’s a view often made richer by its constraints. The essay that many readers will fix on here is “I Go to AWP,” which caused a minor ruckus when Ryan first published it back in 2005 in Poetry magazine. A.W.P. is the Association of Writers & Writing Programs conference, an annual event in which more than 10,000 creative-writing industry folk gather in a vast hotel in some large American city and try to kindle the fire of art while drinking plonky wine in Grand Ballroom E. Ryan is dry and droll as you might expect (“I am given a black tote bag when I register. Very nice with the A.W.P. logo”), and yet the heart of the piece is a quietly severe self-interrogation. Ryan has always felt herself to be different, to be striving for a kind of perfection. And yet here she is, surrounded by waves of thoroughly mediocre writers, many of whom probably think of themselves the same way.In this context, what is difference? What is kindness? At the end of the piece, she finds herself waiting for an airport shuttle with another attendee, who turns out to have used one of Ryan’s essays in a writing class. Ryan can’t bring herself to feel the scorn she believes she should — perhaps? — feel. “No, I didn’t even struggle in my chains,” she writes. “Instead I felt pleased that my essay had proven useful, and flattered to be recognized, and wanted very much to be likable in person.” Whether or not she’s likable in person, the writer who knew to use “likable” in that sentence — who understood the desperate, humble longing in that word and didn’t hesitate to apply it to herself — that writer is more than likable; that writer is worth reading.

David Orr is the author of a poetry collection, “Dangerous Household Items,” and three books about poetry.

Posted by Ficciones at Saturday, December 18, 2021