An Ecstatic, Troubled Poet Comes to Life in a New Biography

An Ecstatic, Troubled Poet Comes to Life in a New Biography

James Wright loved to recite poems he knew by heart, and he seemed to know most of them. Friends described his aural memory as “phonographic.” “It’s as if he has a piano roll in his head,” his college roommate said. Donald Hall recalled Wright declaiming German poetry “for 20 minutes to an astonished assembly of mathematicians.” At a crowded party, while reciting Edwin Arlington Robinson, Wright brushed against a lit stove and set his coat on fire. Oblivious, he continued his performance while a friend poured beer down his smoldering backside.

“James Wright: A Life in Poetry” may be an unexceptional title for Jonathan Blunk’s engrossing biography, but it’s hard to think of a more fitting one. Poetry was Wright’s element. Volatile and peripatetic, buffeted by depression, alcoholism and estrangement from loved ones, he would reach for his books or his notebooks and steady himself. In 1969, after a horrible fight with his wife, he opened his journal and started drafting a plan to update his will, return to his native Ohio and commit suicide. But partway through he became absorbed in the writing itself, recasting sentences as lines of verse. A few would find their way into his “Collected Poems,” which received the Pulitzer Prize three years later.

At a time of furious side-taking in American poetry, Wright belonged to no school but enjoyed honorary membership in many. His mentors were John Crowe Ransom and Theodore Roethke, masters of the metrical line, but perhaps his favorite American poet was Gary Snyder and one of his best friends was Robert Bly. When Allen Tate voted to deny him tenure at the University of Minnesota, he was probably punishing Wright for his association with the anti-formalist Bly as much as for his drunken appearances at student parties.

In truth, Wright probably had more in common with the Latin American, European and Chinese poets he avidly translated than with anyone writing in English. He was an ecstatic poet — from the Greek ekstasis, “to stand outside oneself.” One of his signature poems, “A Blessing,” explicitly imagines such an event: “Suddenly I realize / That if I stepped out of my body I would break / Into blossom.” Transcendence was his obsessive theme and his lifelong project.

Blunk’s first chapter opens with a teenage Wright trying to transcend his hometown — climbing the hill above Martins Ferry, Ohio, “anxious to feel ‘the sense, the vista’ he found in books.” But his view of the Ohio River is obscured by smoke from the steel mills, and the surrounding fields are pocked with strip mines. This image of home as a place of effaced beauty, of desecrated land and devastated lives, would haunt Wright and his work. In another celebrated poem, “Autumn Begins in Martins Ferry, Ohio,” he writes:

All the proud fathers are ashamed to go home.

At the beginning of October,

And gallop terribly against each other’s bodies.

Long after he’d left Martins Ferry for good, Wright had a recurring nightmare of being chased through its darkened streets. When depressed, he spoke of an apparently genuine fear that he would somehow be forced to go back and work in the mills. 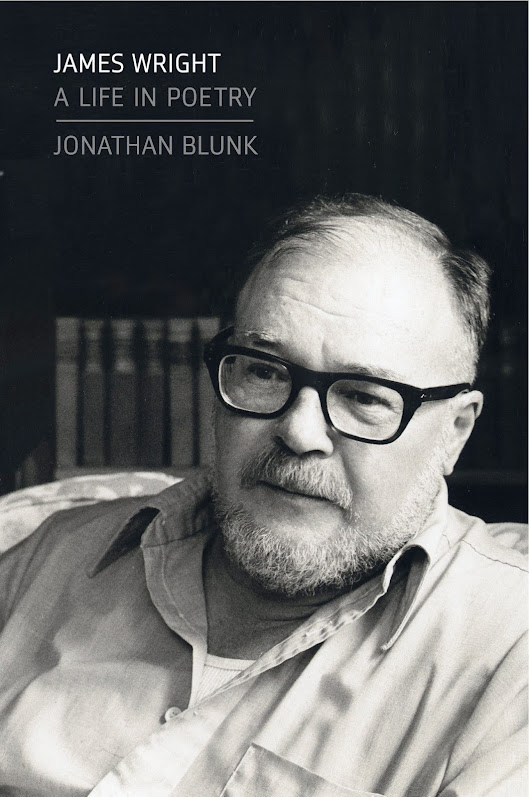 “Being James Wright was a real job,” a friend said. Being around James Wright was labor, too. He was a lot like his poems — brilliant, intense, prone to big dramatic gestures, likely at any moment to take flight or to faceplant. Even his closest friends found him exhausting. For all his literary success, he was always broke and rumpled. As his reputation grew, so did his dependency on alcohol. At a University of Minnesota faculty party where only soft drinks were served, a colleague found Wright in the kitchen with a glass of wine vinegar. He was humiliated by his firing from the school, where he had been an inspiring but erratic teacher — “a beautiful lecturer who spoke off the cuff in whole paragraphs,” according to his student Garrison Keillor, but also one who sometimes failed to show up for class.

As a family man, Wright was similarly half-present. He adored his two sons, Franz and Marshall, but “had little talent for parenting” and was always preoccupied. “Just to be in the same room with him was all I required — and that was very hard for him,” Franz said, heartbreakingly. After Wright’s miserable first marriage ended and his ex-wife took custody of the boys, he saw even less of them. As Franz got older, Wright found him easier to relate to, and even became a kind of mentor to the aspiring poet. (Franz would win the family’s second Pulitzer in 2004.) Angry and troubled, Marshall stopped speaking to his father, and the two never fully reconciled.

Blunk documents all of this dispassionately, letting the facts of Wright’s life speak for themselves — sometimes to a fault. He seems reluctant to interpret the events he’s describing, or hopeful that they require no interpretation. The resulting paragraphs can be desultory, full of fascinating but unintegrated information.

But Wright comes through vividly on almost every page. Blunk began working on the book in 2002, and it’s clearly the better for that long gestation. He draws on nearly 200 interviews with Wright’s family, friends and literary peers, many of whom are now gone: Mark Strand, Carolyn Kizer, Philip Levine, Galway Kinnell, Franz Wright. Blunk makes judicious use of Wright’s papers, including important letters that only recently came to light. Wright helpfully kept carbon copies of much of his private correspondence. He may have spoken contemptuously of “the prying biographer,” but he expected to have one.

It’s in the extensive endnotes that Blunk really shines, illuminating his sources and his resourcefulness: Wright prefaced two late poems with an epigraph from Virgil, “Optima dies prima fugit” — “The best days are the first to flee.” A reader might recognize it from Willa Cather’s “My Antonia.” A serious reader might know that it’s an abbreviation of a longer passage: “The best days of life, for all poor mortal creatures, / Are the soonest to be gone.” But only Blunk, aware that Wright had translated Virgil’s Third “Georgic” and committed much of “My Antonia” to memory, can tell you for certain that Wright knew both versions and chose Cather’s. That’s literary biography at its fine-grained finest.

In his late 30s, Wright happily remarried and took a job at Hunter College in New York City. In his 40s, he enjoyed hard-won sobriety, traveled frequently to Europe and wrote some of his most hopeful, grateful poetry. He seemed finally to have achieved equilibrium, if not transcendence; unable to step out of his body, he had made himself at home in it. A lifelong smoker, he learned he had cancer of the tongue in late 1979 and died a few months later, at 52. The best days were the first to flee.

But Wright did a lot with the days he got. Some critics called a sprawling posthumous collection of poems, “This Journey,” his best yet. Wright had worked on the manuscript from his hospital bed. The day he died, an attending doctor found him “walking around his room in an agitated state. ‘My book, my book,’ Wright kept repeating” — the last words attributed to him.

Eric McHenry teaches at Washburn University. His most recent book of poems is “Odd Evening.”