Contemporary Bengali Poetry in Translation / A Trajectory of New Worlds 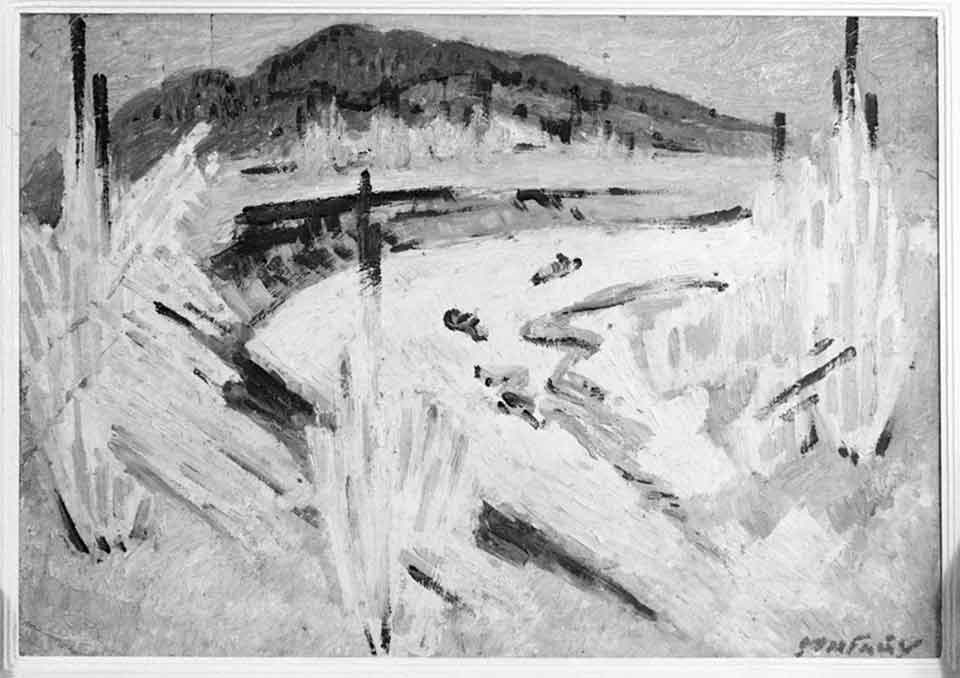 Contemporary Bengali Poetry in Translation: A Trajectory of New Worlds

Translated thoughts or poetry in translation? Well, it can be a debatable topic in a seminar. Poetry is essentially an outpouring of “powerful feelings,” language being an equally powerful instrument. The ebb and flow of words, its rhythm and rhyme, and deliberate use of metaphors add to the charm of poetic exuberance. Translation is, without a doubt, an art where the artist paints, delves deep into the world of colors, where heterogeneity is transformed into homogeneous whole in the painter's paradise. “A translation is no translation unless it will give you the music of a poem along with the words of it,” says John Millington Synge. Although it is hard to delineate the exact line of demarcation—how to translate, how much liberty a translator can enjoy, or where translation transcends the original—yet there is no denying the fact that poetry in translation is “an art of re-creation” in a different language.

The history of translation dates back to the 3rd century BCE, when the Old Testament was translated from Hebrew into Greek by scholars to reach out to the populace and to spread the messages of the Bible. Ancient Greek texts were also translated by Roman poets to enrich their literary works. Translation is essentially a metamorphosis where words undergo a process of regeneration. Translating poetry sometimes becomes a rigorous exercise where the translator has to take a verbatim record of words, phrases, expressions, and allusions, in keeping with the predominant theme of the poems. When a poet himself translates his poems, what does he feel? Tagore himself tried to give an answer to this question: “At least it is never the function of a poet to personally help in the transportation of his poems to an alien form and atmosphere. To the end of my days I should have felt happy and contented to think that the translations I did were merely for private recreation and never for public display if you did not bring them before your readers.”

This dichotomy between translation and re-creation has been and, perhaps, will remain until doomsday. But we must admit that translation builds a sociocultural bridge that enables the readers to share vignettes of a cosmopolitan world of poetry. If we look at Tagore’s poems, we can feel the translations never reached the zenith compared to their original, yet those literary creations irrevocably touched the minds of readers who could, at least, taste the flavor of poetry, though in a different form. Literature is in a constant flux, it keeps changing with time, and poetry is no exception. But it’s a pity that our intelligentsia, more often than not, are still confined to Tagore’s poems in translation. Jibanananda Das, Shakti Chattopadhyay, Subhas Mukhopadbyay, Purnendu Patri—have they gone into oblivion?

Tagore Literary Prize–winning poet Kiriti Sengupta has tried to find an answer to this rhetorical question. Much known for his original work written in the English language, Sengupta has entered the world of translation (of contemporary Bengali poetry) since 2013. While going through the translated poems, readers feel the delicacy and subtlety with which he has fine-tuned the verses. 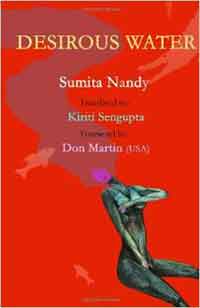 “Important it is / to listen to / the words of the soul, / and surrender the engaging love / to the extreme . . . / I coat the face of / my passionate plea.” Translator Kiriti Sengupta has, in fact, listened to the words of the soul while going through the poems as scribbled by Sumita Nandy, an award-winning Bengali poetess in West Bengal. He has taken care of the poetic usage and refrains that have added to the poetic zeal. Verses flow, at their own will, and readers plunge into the collection Desirous Water (2014) to find beads of pearl from the words that Sengupta has coined.

A translator re-creates, and in the process a new line is born: from the dark caverns, verses come out in clear daylight. Images remain the same, words are given new life: “I can see the inflamed body of / my lifeless dream / It has its flow, however, / and floats in every direction as the flood sets in.” While keeping the imagery intact, Sengupta has shrugged off its ornamentation, making the readers more familiar with the undercurrent that flows within the verses. Literature, being a mirror image of life, tries to bring out our passionate, pulsating heart, at times, in the form of verses. Our desires come out effortlessly, and we enter a world of Keatsian sensuousness: “Exchanging the sensuous words of conjugal act / return home the unimpressive ladies. / . . . instead of becoming a priest / I turn a tantric, desire-filled / say, is it feasible to stay unchanged?” Sumita’s verses touch our heart, as we feel the ardent desire of a lover, craving for a gentle touch, “The pleasure derived from your moist touch / soft, sweet . . . exuding the aroma of food grains.” Sumita’s burning desire is reflected in the amorous verses; but the poems transcend the carnal world and aim to travel “beyond love,” clearly indicating a metaphysical world of poetry. The translated verses lay bare a lovelorn soul, and we feel the fragrance of fresh water flowing down the stream of life, with a passionate heart incarnate.

Sumita’s burning desire is reflected in the amorous verses; but the poems transcend the carnal world and aim to travel “beyond love,” clearly indicating a metaphysical world of poetry. 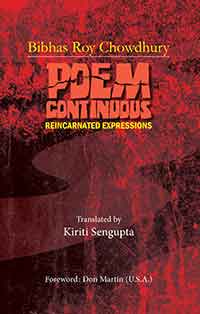 Sengupta considers translation more of a “transition” than it is a literal translation. He has kept his word, and Poem Continuous (2015) has added to Sengupta’s contribution to Bengali literature. The book is a translation of celebrated Bengali poet Bibhas Roy Chowdhury’s poems. Feeling refreshed with Desirous Water, readers enter into a world of facts, where fractions replace bullock-carts, leaving farmers penniless. Soil erosion, ecological imbalances leading to destruction of mother earth—all these have been touched upon with such a delicacy that the readers feel the appalling presence of civilization, a pseudonym of all-pervading darkness: “This earth is my dear horse / running for ages / the fire is about to die, I think / O earth, my heart aches for you nowadays! / The men are under fire, and / I can sense / the heat of destruction” (“I Can Leave, But Why?”).

Poetry, in spite of being a composite art, is never complete. Images flow in a stream; readers deconstruct the poem, and in the process poetry is given a new lease on life. While translating poetry, Sengupta has remained a catalyst, looking into the poems with a dispassionate eye; yet the lines he has scribbled have become a passionate exercise: “You the earth, moan aloud / like the lunatic talk with thy self, / I find you like the very touch . . . / I hide my grief as I enter into the story / of the water and the bridge” (“Lunatic”).

“I don’t want you to become alone / no one wants to be alone / you would feel sad if you become one” (“Monsoon”). The lilting music of Kopai River penetrates Bibhas’s heart, and his poems come out as spontaneous expressions of love. The agony of separation is felt; a splash of rain ignites memories of ecstatic moments.

We do need many monsoons to recuperate; our sweetest moments too take time to sink into oblivion. The intimate details embedded in the first-person narrative mesmerize readers: “I don’t desire to see you too lonely! / No one can live alone here actually / Old times may haunt . . . memories may revisit.” In a slightly different vein the poet pinpoints the sordid, the real. A sense of bereavement haunts Bibhas; the verses bear solemn silence and a delicate touch, where emptiness is part of our existence.

A sense of bereavement haunts Bibhas; the verses bear solemn silence and a delicate touch, where emptiness is part of our existence.

“Ma weeps as she hugs my daughter / Baba is dead, the mango tree does not exist, /and so is the Bakul tree that died in the flood. / They perhaps safeguarded her /at every possible border / Ma now survives with the magic of emptiness” (“Ma Won’t Agree”). We are mere voyagers, traveling through the labyrinth of solitude. Bibhas draws a sepulcher where death is the ultimate reality, signifying nothingness. The poems betray a replica of life, when food is a luxury that people can’t afford: “I’ve fed my appetite long ago /as I sold my sweat and labor / Unfed children with their skeletal frame / haunt me in my dreams while I’m asleep” (“My Country”). Images of poverty-stricken India, a sense of guilt, and a cry for emancipation—all these are presented in the poetic frame, making readers uneasy. Annihilation is not the final note. In spite of shedding tears in private, we fight back and enjoy life as it comes, poetry being an incentive. Sengupta acquaints us with the poetry of Bibhas Roy Chowdhury through the medium of translation, and he has built a harmonious bridge between the two languages. What is poetry? Rhymed words, free verse, or both? Sengupta tries to play a lyre where words flow, the strings touch our heart. Poem Continuous is a collection of translated poems that portrays life in its multifarious forms. Here the poems come out as a celebration of life itself, foretelling death as an inevitable natural phenomenon. “Why are you so worried? / No loss . . . no win . . . / A solitary soul lies intimate / With the mortal being” (“Odor”). The concept of soul as immortal, even after death, reminds the reader of the Gita, where Lord Krishna opens up a new world to Arjuna in the battlefield of Kurukshetra: “na hanyate hanyamane shorire” (the soul never dies; only our mortal frame leads to death). Bibhas Roy Chowdhury envisions a profound philosophy of life through the medium of poetry, which grows along with time; we breathe in the verses, the lines get proper nourishment in the soil, and poetry rejuvenates: “This is the time to make a promise / To whom and whose words shall I give? / Impossible it seems / without the dreams” (“Poets and Poems”).

When the poet writes, he can feel exuberance and suffering, words come out from the depth of his heart, and he scribbles life as he sees it. Bibhas Roy Chowdhury’s poems present a panoramic vision of our country: poverty-stricken India, a sense of alienation after the Partition of Bengal, fidelity of human relationships. Translator Kiriti Sengupta has tried to feel the essence of the poems, and his translation has focused on new arenas of poetry, keeping in perfect consonance with the original. Now it’s the need of the hour to keep up the rich heritage of Bengali poetry and enhance the cross-cultural dimensions. Every word that we translate bears fruits of our culture. A translator is a creator, and Sengupta’s translations are the offspring of love’s labor. Translation transcends, it makes us familiar with the outer world, and we travel across the global village with the wings of poetry. As Italo Calvino says, “Without translation, I would be limited to the borders of my own country. The translator is my most important ally. He introduces me to the world.” Devika Basu is a high school English teacher, bilingual poet, translator, and a lover of Spanish literature. She loves to explore the hidden treasures of different literary genres, with a special focus on poetry. Her published works include three books of poems. Her pen scribbles the diverse aspects of life; Devika has traveled extensively and she would like to walk across the inroads of life with poetry.