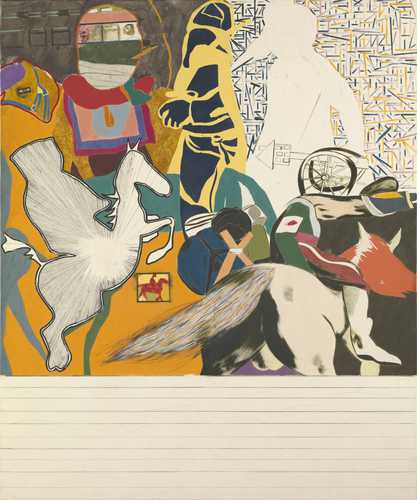 The Poetry Society is curating this year’s selection in the organisation’s centenary year. Founded in 1909, the Society is now one of Britain’s most high-profile arts organisations, helping poets and poetry thrive in Britain and beyond. Membership is open to all, though members include many of the UK’s most eminent poets. It publishes the highly respected journal Poetry Review; and also works to deliver a programme of poetry in education, supporting and developing creativity among young people and communities.

A swirl of ochre —- then a brighter yellow
fills in the woodcut lines of an alien figure;
another stubby man wears a red scarf:
Carnival colours. What’s the story here?

This is the euphoria of Revolution:
Ukraine in flames, the air a grey smoke.
Ash beneath dark skies. From a horse’s white rump,
the colours turn in a kaleidoscope.

But where is Babel? Such insolence
for a myopic Jew —- to ride
alongside Kuban Cossacks into Chagall’s
villages of dirt-floor shacks.

The Whites have already trashed the stelt.
Babel rides with the Red Cavalry,
shamed by their courage, though they loot and kill.
Bystander angel, he records the dying.

Kitaj has sketched a man with a bird’s head,
against the scribbled map of a little town,
an image styled after a medieval
Haggadah, telling the story of Passover.

Secrets of a shared family tree:
the faithful passions of the trapped,
the cheating promises of liberty –
Kitaj, like Babel, draws the savagery.