Russian poet and essayist, who is regarded alongside Boris Pastenak, Marina Tsvetaeva and Anna Akhmatova as one of the greatest voices of the 20th-century Russian poetry. Most of Mandelstam's works were unknown outside his own country and went unpublished during the Stalin era (1929-53). Along with Anna Akhmatova, Mandelstam was one of the foremost members of Acmeist school of poetry. His early works were impersonal but later he also analyzed his own experiences, history, and the current events.

"Perhaps my whisper was already born before my lips."

Osip Mandelstam was born in Warsaw, but he grew up in St.Petersburg, the city which he celebrated in many of his poems. Mandelstam's parents were Jewish, but not very religious. Mandelstam himself was baptized a Lutheran in Finland. Emil Veniaminovich Mandelstam, his father, was a successful leather-goods dealer, who had broken with religious beliefs in his youth.  "My father had absolutely no language; his speech was tongue-tie and languagelessness," he recalled. "The Russian speech of a Polish Jew? No. The speech of a German Jew? No again." (The Noise of Time and Other Prose Pieces, 1988, p. 85) Mandelstam's mother, Flora Osipovna Verblovskaya, came from Vilno; she was a piano teacher. "The speech of my mother was clear and sonorous without the least foreign accent." (Osip Mandelstam by Clarence Brown, 1978, p. 13)

At home Mandelstam was first taught by tutors; French and and Swiss governesses succeeded one another in the nursery. He then attended the prestigious Tenishev School (1900-07),  which was educationally very advanced, and traveled then to Paris (1907-08) and Germany (1908-10), where he studied Old French literature and the philosophy of Kant at the University of Heidelberg (1909-10). In 1911-17 he studied philosophy at St. Petersburg University but did not graduate. From 1911, Mandelstam was member of 'Poets Guild' and had close personal ties with Anna Akhmatova and Nikolai Gumilev. His first poems appeared in 1910 in the journal Apollon.

As a poet Mandelstam gained fame with the collection Kamen (1913, Stone). The subject matters ranged from music to such triumphs of culture as the Roman classical architecture and the Byzantine cathedral of Hagia Sophia in Constantinople. It was followed by Tristia (1922), which confirmed his position as a major poet, and Stikhotvorenia  1921-25, (1928). In Tristia Mandelstam made connections with the classical world and contemporary Russia as in Kamen. A new themes was the notion of exile. The mood is sad, the poet is saying his farewells: "I have studied science of saying good-bye / in bareheaded laments at night".

Mandelstam welcomed February 1917 Revolution but he was hostile at first to October 1917 Revolution. When Yakov Blyumkin, a revolutionary terrorist, boasted in a café of having a pile of presigned deat warrants, Mandelstam tore them to shreds. In 1918 he worked briefly for Anatoly Lunacharskii's Education Ministry in Moscow. With his frequent visits to the south Mandelstam managed to avoid much of the troubles that complicated everyday life during the Civil War. After Revolution his views about contemporary poetry became harsh. The poetry of young people was for him a ceaseless cry of an infant, Mayakovsky was childish and Marina Tsvetaeva tasteless. He only accepted Pasternak and also admired Akhmatova. Critics classified Mandelstam and Akhmatova as "guardians of tradition" – first with a positive attitude, then their association with the "old world" was turned against them.

In 1922 Mandelstam married Nadezhda Iokovlevna Khazin, who accompanied him throughout his years of exile and imprisonment. In the 1920s Mandelstam supported himself by writing children's books and translating works by Upton Sinclair, Jules Romains, Charles de Coster and others. He did not compose poems from 1925 to 1930 but turned to prose.

With the help of the influetial Soviet politician Nikolai Bukharin, Mandelstam made in 1930 a trip to Armenia. He had published some poems for children in 1926, he  then lapsed into silence as a poet. This journey ended his dry period. Mandelstam saw his role as an outsider and drew parallels with his fate and that of Pushkin. The importance of preserving the cultural tradition became for the poet a central concern. The Soviet cultural authorities were rightly suspicious of his loyalty to the Bolshevik rule. "What a great thing is a police station!" Mandelstam often said, repeating lines by nthe poet Velim  Khlebnikov. "The place where I have my rendezvous with the State." (Face to the Village: The Riazan Countryside Under Soviet Rule, 1921-1930 by Tracy McDonald, 2011, p. 51) To escape his influential enemies Mandelstam traveled as a journalist in the distant provinces. Mandelstam's Journey to Armenia was his last major work published during his life time. Heavily censored, it appeared in a journal in 1933. 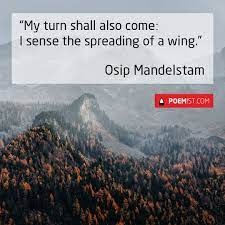 "Whenever he's got a victim, he glows like a broadchested
Georgian munching a raspberry."
(composed in November 1933; translated by Burton Raffel and Alla Burago)

For the first time Mandelstam was seized by security police in 1934 for epigram he had made on Joseph Stalin, the "Kremlin mountaineer, the murderer and peasant-slayer" as he called him in his mixture of praise and satire. "And every killing is a treat / For the broad-chested Ossete." What were Mandelstam's intentions and the state of his mind at the time he composed the poem have been under debate. It was not written down but recited  in gatherings of his friends. Possibly Mandelstam thought that his days were numbered or believed that the dangerous lines, which would lead to his death, would be the spark that would ignite a radical political change. Nadezhda Mandelstam even submitted the piece to the Writers' Union to be considered for publication. A truncated version of the 'Stalin Ode' was published in 1974 in an American journal, a full version appeared in 1976.

Mandelstam was arrested on a warrant signed by Genrikh Grigoryevich Yagoda, the head of the Soviet Secret Police, known as the Cheka. (Yagoda himself was shot in 1938.) At prison Mandelstam was tortured tortured physically and mentally. Stalin took a personal interst in Mandelstam, with whom he played cat and mouse. He also had a telephone conversation with Boris Pasternak, asking whether he had been present when the lampoon about himself, Stalin, was recited by Mandelstam. Pasternak answered that it seemed to him of no importance. "Mandelstam's case in being reviewed. Everything will be all right," Stalin promised. (Stalin: The Court of the Red Tsar by Simon Sebag Montefiore, 2004, p. 133) When Pasternak wanted to speak with the dictator about very important matters, "about life and death," the phone was hung up.

After being signed out from Lubyanka, Mandelstam asked Nadezhda, is the future behind them or ahead of them. Half insane from the prison experience, he was exiled with his wife to Cherdyn, the oldest city of Ural. After suicide attempt, his sentence was commuted to exile in Voronezh, ending in 1937. There he wrote an ode to Stalin. It did not save him from re-arrest. In his notebooks from Voronezh (1935-37) Mandelstam said, "He thinks in bone and feels with his brow / And tries to recall his human form" - eventually the poet identifies himself with his tormentor.

During this period Mandelstam gave to Natasha Shtempel, his brave friend in the hard conditions, a poem in which women carried the role of mourning and preserving: "To accompany the resurrected and to be the first / To welcome the dead is their vocation. / And to demand caresses from them is criminal." Mandelstam was arrested for "counter-revolutionary" activities in May 1938 and sentenced to five years in a labour camp. Interrogated by Nikolay Shivarov, he confessed that he had authored a counter-revolutionary a poem which begins with the lines: "We live without sensing the country beneath us, / At ten paces, our speech has no sound / And when there's the will to half-open our mouths / The Kremlin crag-dweller bars the way." In the transit camp, Mandelstam was already so weak that he couldn't stand. He died of starvation and madness in the Gulag Archipelago in Vtoraia rechka, near Vladivostok, on December 27, 1938. His body was taken to a common grave.

Mandelstam's widow kept her husband's legacy alive against all odds. Nearly homeless, she had virtually as much material possessions as a convict; the most expensive item in her one-room apartment on the outskirst of Moscow was a cuckoo clock. During the war years Anna Akhmatova helped her to escape to Tashkent, where she taught Englist at the Central Asian State University.

International fame Osip Mandelstam started to acclaim in the 1970s, when his works began to appear in the West and in the Soviet Union. Nadezhda Mandelstam memoirs,  Hope Against Hope (1970) and Hope Abandoned  (1974), depicted their life and Stalin era. They first circulated underground, excerpts appeared in official journals, and eventually  they were published abroad. Mandelstam's Voronez poems, which came out in 1990, are the closest approximation what the poet planned to write if he had survived.

Mandelstam's essays dealt with a wide range of topics. 'Conversations about Dante' has been considered a masterpiece of modern criticism with its fanciful use of analogies. 'I compare, therefore I am,' so Dante might have put it. He was the Descartes of metaphor. Because matter is revealed to our consciousness (and how could we experience someone else's?) through metaphor alone, because there is no existence outside comparison, because existence itself is comparion." Mandelstam says that Pushkin's "splendid white teeth are the masculine pearls of Russian poetry", he sees the Divine Comedy as a "journey with conversations", and draws attention to Dante's use of colors. Writing is constantly compared to making music. " 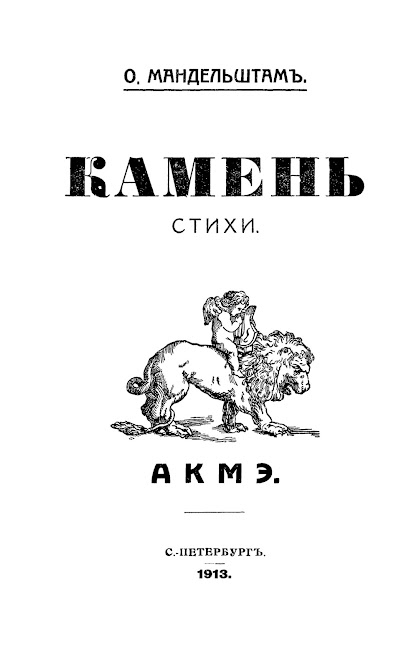 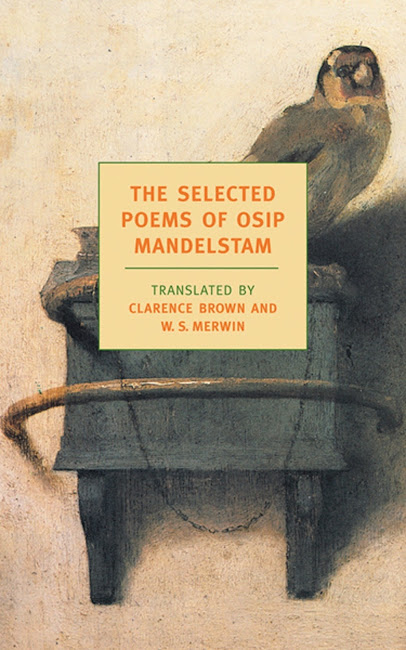