Louise Glück / Parable of the Swans 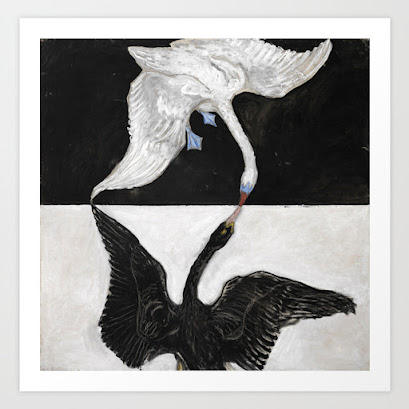 Parable of the Swans

BY LOUISE GLÜCK
Louise Glück / Parábola de los cisnes
On a small lake off
the map of the world, two
swans lived. As swans,
they spent eighty percent of the day studying
themselves in the attentive water and
twenty percent ministering to the beloved
other. Thus
their fame as lovers stems
chiefly from narcissism, which leaves
so little leisure for
more general cruising. But
fate had other plans: after ten years, they hit
slimy water; whatever the filth was, it
clung to the male’s plumage, which turned
instantly gray; simultaneously,
the true purpose of his neck’s
flexible design revealed itself. So much
action on the flat lake, so much
he’s missed! Sooner or later in a long
life together, every couple encounters
some emergency like this, some
drama which results
in harm. This
occurs for a reason: to test
love and to demand
fresh articulation of its complex terms.
So it came to light that the male and female
flew under different banners: whereas
the male believed that love
was what one felt in one’s heart
the female believed
love was what one did. But this is not
a little story about the male’s
inherent corruption, using as evidence the swan’s
sleazy definition of purity. It is
a story of guile and innocence. For ten years
the female studied the male; she dallied
when he slept or when he was
conveniently absorbed in the water,
while the spontaneous male
acted casually, on
the whim of the moment. On the muddy water
they bickered awhile, in the fading light,
until the bickering grew
slowly abstract, becoming
part of their song
after a little longer.
"Parable of the Swans" by Louise Glück
From Meadowlands, 1996

Posted by Ficciones at Wednesday, October 14, 2020