Houellebecq the poet: who knew? 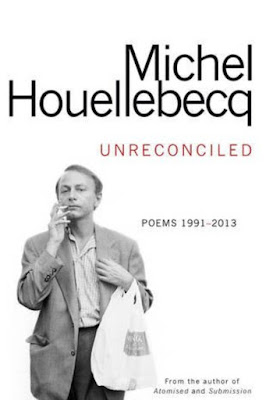 Since the publication of his latest novel Submission, foreseeing a France submitting to Islam, on the day of the Charlie Hebdo attacks in January 2015, the stature of Michel Houellebecq as perhaps the most radical and far-sighted  novelist now writing in any language,  has been widely recognised. All six of his novels, beginning with Whatever in 1994, now look like contemporary classics.
What’s less well-known among his English-language readers is that he began his literary career as a poet, in 1991 publishing both his first collection, The Pursuit of Happiness, and a marvellous, Baudelairean poetic manifesto, Rester Vivant: méthode (Staying Alive, not yet translated). To Houellebecq, poetry remains primary. “The novel… in comparison to the poem remains a minor genre,” he told Bernard-Henri Levy in their correspondence, Public Enemies.
His poetry has been presented in English before, in The Art of Struggle, a dual-language text of his second collection by academics Delphine Grass and Timothy Mathews (Herla/Alma Books, 2010) but has previously made little impression here. Now his main British publisher Heinemann has brought out a substantial selection from all four of his books of poems, in both French and English, translated by Gavin Bowd, who has known him for 20 years and whom Houellebecq (whose English is not  bad) has amicably called “my best translator in the language of Donald Duck”.
The book is presented by the publisher as simply as possible, almost indeed as if it were a novel in short lines, doubtless in the hope of winning it the wide readership it deserves. There’s no introduction whatsoever, just the plain text, not even an index.

That seems a pity, for the collection does actually need some explanation, even for those who already know something of Houellebecq’s work. It is very much his “personal anthology”, in which he has rearranged 132 poems not chronologically but into five themed sections, moving from comic desperation with the world of heartless consumption,   through a search for love and intimacy nonetheless, to a final section of some degree of mystical acceptance, Immobile Grace.
When published in French (Gallimard, 2014), the anthology was preceded by a long and brilliant introduction by the young academic Agathe Novak-Lechevalier, which not only explained the structure of the book but the unique qualities of Houellebecq’s poetry, the true extent to which it is an act of non-reconciliation, of “taking note, without concession, of the monstrosity of the world”, a world that is “strictly unbearable”.
And his means of confronting that world  are those of structure, as she says. “Metrical structure, rhyming structure, rhythmic structure: versification is not an adventitious pleasure, it’s the very principle of resistance to a deliquescent world.”
Just so. In his poetry Houellebecq presents the shocks and absurdities of modern life not casually but with beautiful formality, in alexandrines worthy of his beloved Lamartine, or quatrains as precise and irrefutably rhymed as those of A E Housman, charting what is not to be endured. His poetry is often not only absolutely direct  emotionally — contrary to his reputation as a misogynistic cynic, deeply romantic even — but also remarkably funny, deploying, as Novak-Lechevalier  observes, an art of montage, “the brutal juxtaposition of heterogeneities”.
And here is the rub. Of all literary forms, poetry, depending as it does on those precise verbal structures, is the least translatable. Houellebecq’s novels are pretty fully available to the English language-only reader. But the truth is that, admirably accurate as Bowd’s translations are, Houellebecq’s poems, read in English alone, unrhymed and in a completely different rhythm, are nothing like as remarkable as they are  in the original. If you are able to use this edition as a crib, it’s a treat. But if you consult only the English you’ll wonder why this poetry could possibly  be worth taking to heart.
That’s sadly true of the very simplest piece. Houellebecq: “Pourquoi ne pouvons-nous jamais/Jamais/Être aimés?” Bowd: “Why can we never/Never/Be loved?” It doesn’t rhyme the same way,  it’s not a mantra.
Or again: “Il n’y a pas d’amour/ (pas vraiment, pas assez)/ Nous vivons sans secours,/ Nous mourons délaissés.” Worthy of Baudelaire, hard to forget once read. “There is no love/ (not nearly, not enough)/ We live unaided,/ We die abandoned.” Flat as a pancake, gone in a flash.
So, as a publication in English of a substantial part of the work of one of the greatest authors of the age, unlikely to be particularly profitable, this is an admirable endeavour.
However, it could have been so much more helpful an edition — introducing itself, perhaps  translating Rester Vivant as an appendix, and even the fantastically raw journal Mourir that Houellebecq  wrote in 2005 as a contrary summation of his life at that point (still available online).
A missed opportunity. For Michel Houellebecq is one of those writers who matters now, in his entirety, if any do.