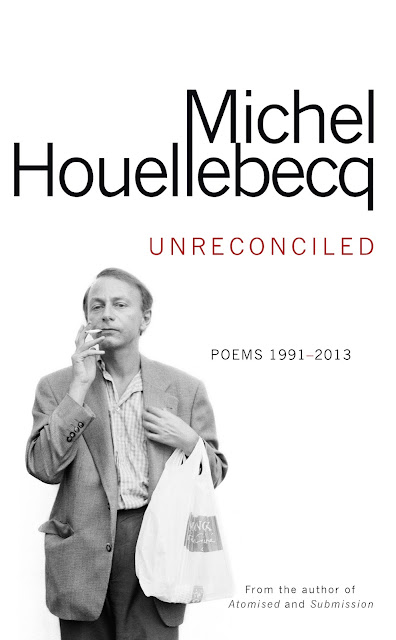 ‘The first time I made love / Was on a Greek beach. At sunset / The girl ran off / Saying I was a useless shag’

I went on holiday with my 10-year-old son
We stayed in a shitty hostel in the Alps.
It rained almost every day
And neither of us could think of anything much to say.
We stuck it out for a week and then
Decided to cut our losses and go home.
It was the best time we ever had together.

I could hear stumps rubbing
The amputated man next door.
Upstairs the blood of disembowelled neighbours
Runs through runnels down the corridor.
The concierge grumbles and watches TV.
It would all have been different
If I had bought some furniture.
Maybe tomorrow. I add washing up liquid
To the list of things I’m not going to buy.
I know I’m human because I want to die.

My dad was a solitary and barbarous cunt
He always treated me like a rat you hunt.
The thought that I might outlive him
Caused him pain in his last days.
He bathed in his urine, incontinent
In both body and thought.
And then he died. Good riddance.

If I write something down does it make it more real? If I write in what appears to be prose does it still count as poetry. To be honest, I’m not at all sure what I’m doing here. None of us is really. It’s all a bit of a waste of time. Filling in the long blanks before we die.
I pick up a book and wonder if I would have been able to solve Maxwell’s equations if I had been Maxwell. I suppose the answer must be yes because Maxwell was Maxwell and he did solve the equations. This ought to give me hope but somehow it makes me feel even more inadequate.

The first time I made love
Was on a Greek beach. At sunset.
It sounds romantic but it wasn’t really.
My premature ejaculation rather spoiled things
And the girl, whose name I never knew,
Ran off, saying I was a useless shag.
When I got back to France I went to the hospital
Because I thought I had got a sexually transmitted disease.
I like hospitals. The stench, the terror, the tears.
It’s where life begins and ends.
On that occasion it turned out I didn’t have syphilis.
But sooner or later I will get a fatal disease.
Cancer probably. And then I won’t have to leave hospital. Good.

It was a starless night, the way I like it.
I had run out of butter so I went to the shops.
On my way I saw a Muslim standing alone on the pavement.
I asked him if he would blow me up in a suicide attack.
He stared blankly at me. There was no kindness in his eyes.
When I finally got to the Monoprix
I remembered it had shut down
Several months ago.

The subtle, interstitial presence of God
Has long since disappeared.
With any luck, I will too.
And so will you.
We will be forgotten
At the bottom of a dark ocean
Our bodies gutted by fish.

The State of Me

My knees are crippled with arthritis
My stent is begging to fail
I feel a cancer growing inside my bowel
For I shit nothing but blood
Things are beginning to look up.
Digested read, digested: The end is in sight.
THE GUARDIAN