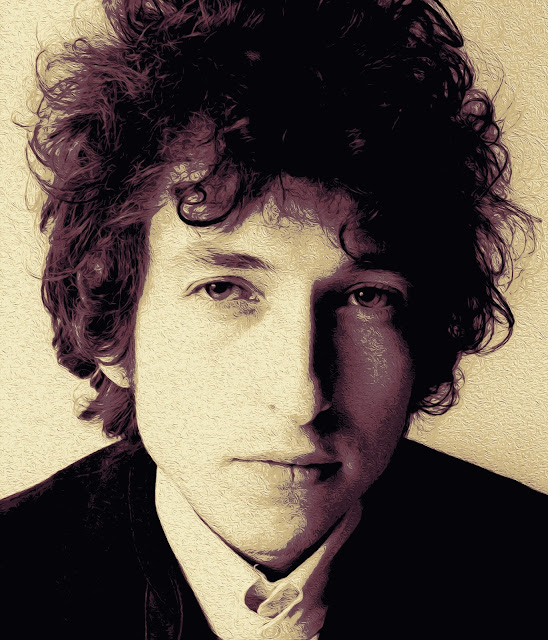 Ain’t it just like the night to play tricks when you’re tryin’ to be so quiet ?We sit here stranded, though we’re all doing our best to deny itAnd Louise holds a handful of rain, tempting you to defy itLights flicker from the opposite loftIn this room the heat pipes just coughThe country music station plays softBut there’s nothing really nothing to turn offJust Louise and her lover so entwinedAnd these visions of Johanna that conquer my mind.
In the empty lot where the ladies play blindman’s bluff with the key chainAnd the all-night girls they whisper of escapades out on the D-trainWe can hear the night watchman click his flashlightAsk himself if it’s him or them that’s really insaneLouise she’s all right she’s just nearShe’s delicate and seems like the mirrorBut she just makes it all too concise and too clearThat Johanna’s not hereThe ghost of electricity howls in the bones of her faceWhere these visions of Johanna have now taken my place.
Now, little boy lost, he takes himself so seriouslyHe brags of his misery, he likes to live dangerouslyAnd when bringing her name upHe speaks of a farewell kiss to meHe’s sure got a lotta gall to be so useless and allMuttering small talk at the wall while I’m in the hallOh, how can I explain ?It’s so hard to get onAnd these visions of Johanna they kept me up past the dawn.
Inside the museums, Infinity goes up on trialVoices echo this is what salvation must be like after a whileBut Mona Lisa musta had the highway bluesYou can tell by the way she smilesSee the primitive wallflower friezeWhen the jelly-faced women all sneezeHear the one with the mustache say, “JeezeI can’t find my knees.”Oh, jewels and binoculars hang from the head of the muleBut these visions of Johanna, they make it all seem so cruel.
The peddler now speaks to the countess who’s pretending to care for himSaying, “Name me someone that’s not a parasite and I’ll go out and say a prayer for him.”But like Louise always says“Ya can’t look at much, can ya man.”
As she, herself prepares for himAnd Madonna, she still has not showedWe see this empty cage now corrodeWhere her cape of the stage once had flowedThe fiddler, he now steps to the roadHe writes everything’s been returned which was owedOn the back of the fish truck that loadsWhile my conscience explodesThe harmonicas play the skeleton keys and the rainAnd these visions of Johanna are now all that remain.

Pistol shots ring out in the barroom nightEnter Patty Valentine from the upper hallShe sees a bartender in a pool of bloodCries out my God, they killed them allHere comes the story of the HurricaneThe man the authorities came to blameFor somethin’ that he never donePut in a prison cell, but one time he could-a beenThe champion of the world
Three bodies lyin’ there does Patty seeAnd another man named Bello, movin’ around mysteriouslyI didn’t do it, he says, and he throws up his handsI was only robbin’ the register, I hope you understandI saw them leavin’, he says, and he stopsOne of us had better call up the copsAnd so Patty calls the copsAnd they arrive on the scene with their red lights flashin’In the hot New Jersey night
Meanwhile, far away in another part of townRubin Carter and a couple of friends are drivin’ aroundNumber one contender for the middleweight crownHad no idea what kinda shit was about to go downWhen a cop pulled him over to the side of the roadJust like the time before and the time before thatIn Paterson that’s just the way things goIf you’re black you might as well not show up on the street‘Less you want to draw the heat
Alfred Bello had a partner and he had a rap for the copsHim and Arthur Dexter Bradley were just out prowlin’ aroundHe said, I saw two men runnin’ out, they looked like middleweightsThey jumped into a white car with out-of-state platesAnd Miss Patty Valentine just nodded her headCop said, wait a minute, boys, this one’s not deadSo they took him to the infirmaryAnd though this man could hardly seeThey told him that he could identify the guilty men
Four in the mornin’ and they haul Rubin inThey took him to the hospital and they brought him upstairsThe wounded man looks up through his one dyin’ eyeSays, wha’d you bring him in here for? He ain’t the guy!Here’s the story of the HurricaneThe man the authorities came to blameFor somethin’ that he never donePut in a prison cell, but one time he could-a beenThe champion of the world
Four months later, the ghettos are in flameRubin’s in South America, fightin’ for his nameWhile Arthur Dexter Bradley’s still in the robbery gameAnd the cops are puttin’ the screws to him, lookin’ for somebody to blameRemember that murder that happened in a barRemember you said you saw the getaway carYou think you’d like to play ball with the lawThink it might-a been that fighter that you saw runnin’ that nightDon’t forget that you are white
Arthur Dexter Bradley said I’m really not sureThe cops said a poor boy like you could use a breakWe got you for the motel job and we’re talkin’ to your friend BelloYou don’t wanta have to go back to jail, be a nice fellowYou’ll be doin’ society a favorThat sonofabitch is brave and gettin’ braverWe want to put his ass in stirWe want to pin this triple murder on himHe ain’t no Gentleman Jim
Rubin could take a man out with just one punchBut he never did like to talk about it all that muchIt’s my work, he’d say, and I do it for payAnd when it’s over I’d just as soon go on my wayUp to some paradiseWhere the trout streams flow and the air is niceAnd ride a horse along a trailBut then they took him to the jailhouseWhere they try to turn a man into a mouse
All of Rubin’s cards were marked in advanceThe trial was a pig-circus, he never had a chanceThe judge made Rubin’s witnesses drunkards from the slumsTo the white folks who watched he was a revolutionary bumAnd to the black folks he was just a crazy niggerNo one doubted that he pulled the triggerAnd though they could not produce the gunThe D.A. said he was the one who did the deedAnd the all-white jury agreed
Rubin Carter was falsely triedThe crime was murder one, guess who testifiedBello and Bradley and they both baldly liedAnd the newspapers, they all went along for the rideHow can the life of such a manBe in the palm of some fool’s handTo see him obviously framedCouldn’t help but make me feel ashamed to live in a landWhere justice is a game
Now all the criminals in their coats and their tiesAre free to drink martinis and watch the sun riseWhile Rubin sits like Buddha in a ten-foot cellAn innocent man in a living hellThat’s the story of the HurricaneBut it won’t be over till they clear his nameAnd give him back the time he’s donePut in a prison cell, but one time he could-a beenThe champion of the world

Shadows are fallin’ and I’ve been here all dayIt’s too hot to sleep and time is runnin’ awayFeel like my soul has turned into steelI’ve still got the scars that the sun didn’t healThere’s not even room enough to be anywhereIt’s not dark yet but it’s gettin’ there.Well, my sense of humanity has gone down the drainBehind every beautiful thing there’s been some kind of painShe wrote me a letter and she wrote it so kindShe put down in writin’ what was in her mindI just don’t see why I should even careIt’s not dark yet but it’s gettin’ there.