he Angel in the House, which has flapped its pernicious wings over far too many women's lives, hovered over the Kansas farmhouse where I grew up. When I was eight, my parents turned childcare and housework over to me: I was a girl; that was what I was born to do. The Angel was the evil creation of the Victorian writer Coventry Patmore, who invoked immolation of all ambition and desire as the feminine ideal. It was a heavy burden for women, and many rebelled against its strictures. American farm women were driven into psychosis by their isolation and heavy domestic burden; in the 1870s and 80s there was an epidemic of midwestern women burning down their homes, killing themselves and their families in the process.

Victorian writers tackled the Angel more creatively. A number, including Elizabeth Barrett Browning and Isabella Bird, took to their beds, but it was Barrett Browning who also first confronted the Angel head on in her 1856 poem, Aurora Leigh. Women may be educated, Aurora scornfully says, "As long as they keep quiet by the fire /. . . their angelic reach / Of virtue, chiefly used to sit and darn".

A few cantos later, her cousin proposes marriage, telling her to give up her dreams of poetry and support him in his work. Aurora turns him down. Like Aurora, Barrett Browning dedicated her life to her art, but she also had a passion for social justice. When Robert Browning convinced her of his love, she finally rose from her sickbed and ran off with him to Italy, where she devoted the remaining 12 years of her life to her art, to writing and working on behalf of Italian independence and an end to slavery in America — and to her lover.

Perhaps if I'd known of Barrett Browning's life and work when I was young, I might have pushed aside the Angel's wings more easily. Like her, I've been fortunate in love, but in her courage, her poetry and her dedication to social justice, she sets the bar for me. 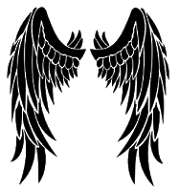