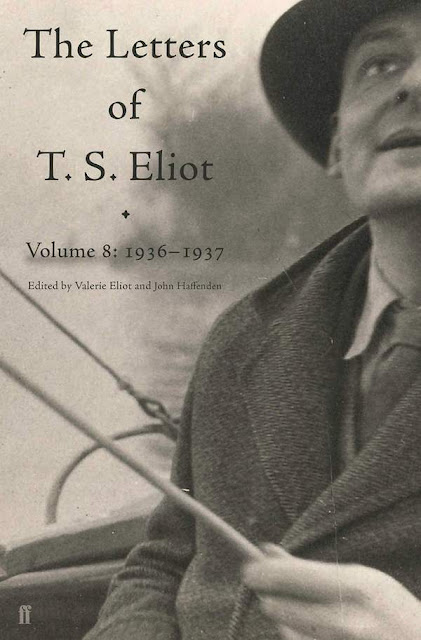 The Letters of T S Eliot: Volume 8 by Valerie Eliot and John Haffenden

The latest collection of T S Eliot’s letters is wonderfully insightful — but is it a little too exhaustive?

This immense edition of the correspondence of the greatest poet of his time is now entering its second decade. Covering just two years, this volume amounts to 1,100 pages, bringing the total so far published to a little over 7,600 pages, with 27 years of Eliot’s life still to go. Yet it is not even complete. The indefatigable, exemplary editor, John Haffenden, has posted the letters he chose not to include in each volume on a website, tseliot.com, and for these two years alone there are hundreds of them, perhaps even more than he has actually printed — eight, for example, from January 1, 1936 alone.
Many of  the printed letters still seem at first of modest interest only: processing business for Faber & Faber, where he was an “ordinary director”; for the magazine he edited, The Criterion; and for his own career as a writer and, increasingly, a public man.
He commissions books and articles, he assesses submissions. He responds to invitations and suggestions, always with courtesy, even when refusing. He supplies references and letters of introduction, he offers advice. He constantly apologises for delays in replying and he thanks people for their contributions, their comments, their hospitality, friendship and support.
All this can make repetitious reading now, essential though it may have been then to the literary culture he was seeking to nurture. Yet taken together these letters are little less than a lesson in conduct, a kind of tireless poise, a demonstration of grace under pressure.
They are invariably, as Haffenden notes in his preface, “humane and engaging, constructive and inventive, and frequently jokey” — and sometimes they are more than that: revealing, touching and wise. They are also, like all good letters, wonderfully different in tone when writing to different friends and acquaintances.
In these years, Eliot’s first stage play, Murder in the Cathedral, was being produced, and he was working on The Family Reunion.
And it was during this time that his wife, Vivien Haigh-Wood Eliot, was finally committed to a psychiatric asylum, Northumberland House in Finsbury Park, close to Manor House Tube, after being found wandering in the streets in the early hours and taken to a police station.
Haffenden includes enough of Vivien’s own letters, to her brother, to her bank, to Faber, and so forth, to make it clear quite how deranged she had become by this time, believing she was “OSTENTATIOUSLY FOLLOWED”, for example, and pretending to be other people acting on her behalf.


Eliot’s own letters dealing with her committal and support are faultlessly correct and responsible. Only once or twice in these years does he reveal his agony. In July 1936 he briefly mentions to Dorothy Pound: “I am rather shaky at the moment because I ran into my late wife in Wigmore Street an hour ago, and had to take to my heels: only people who have been ‘wanted’ know the sort of life I lead.”
Only to his brother Henry does he speak directly of the “horrors” of his private life. There’s a revealing  letter, though, in response to Geoffrey Faber’s misgivings about the sex in Djuna Barnes’s Nightwood, which the company was publishing. Faber had naively confessed: “My own private struggle all my life has been to prevent sex meaning too much.” Eliot not only sees no sense in this, his view is quite the opposite, that trying to “keep sex in its place” is itself a symptom of instability.
“Between any two people (and the more intimate their relations the more important this becomes) there is always an unresolvable element of hostility,” he says. “It is I think, a coming to terms between the elements of attraction and repulsion that constitutes permanent affection…”
To Bonamy Dobrée he writes eloquently about his understanding of St John of the Cross’s doctrine that in order to arrive at the love of God one must divest oneself of the love of created beings. “I don’t think that ordinary human affections are capable of leading us to the love of God, but rather that the love of God is capable of informing, intensifying and elevating our human affections, which otherwise may have little to distinguish them from the ‘natural’ affections of animals,” he explains.
These are themes deep in his work — but there are also letters here about pyjamas, sherry and opening a cheese restaurant. There’s a salad recipe and a mock Abdication diary; a take-off of Henry James and spoof readers’ reports on his own verses; a denunciation of the English Verse Speaking Association and an inspiring letter of advice to the young poet George Barker, insisting “it is only necessary poems that matter” and “nothing is worth doing twice”.
Just too many letters, though? Eliot, who did not want a biography or any letters printed “of any intimacy to anybody”, might have thought so. To one contributor he writes: “I quite agree that there are too many books, and that most books are too long. The tendency for books to say what they have to say at much greater length than necessary no doubt has something to do with the deterioration of the reading public into mere ruminants, who can only nourish themselves by a great deal of grass and reject more concentrated food.” Ha! Now, Faber, just where is that readers’ edition of Eliot’s uncollected prose?
The Letters of T S Eliot: Volume 8: 1936-1938 edited by Valerie Eliot and John Haffenden (Faber, £50)
EVENING STANDARD