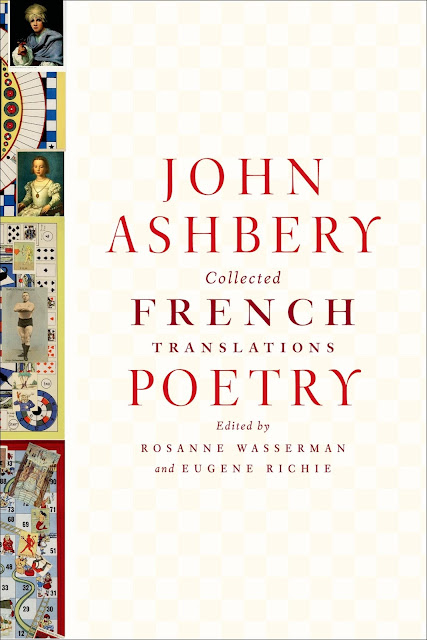 
I
n a 1956 letter to Kenneth Koch, John Ashbery wrote: “I hate all modern French poetry, except for Raymond Roussel”, specifying: “I do like my own wildly inaccurate translations of some of the 20th-century ones, but not the originals”. The editors of this book rather solemnly gloss this as Ashbery musing on “his own hard work”, and his “difficulties in building a canon for his own new poetic journeys”. They may be right, but the comment is also funny and provocative, taking a dandy-esque line on the tired debates (tired even then and comprehensively exhausted now) about accuracy and fidelity in translation.


This book (along with its sibling, Ashbery’s Collected French Translations: Prose) is mostly non-canonical in focus. Though several poets may be familiar – Reverdy, Breton, Supervielle, Eluard – others, such as Daumal, Ganzo, Lubin, Blanchard, Roche, will not. The highlights include a few poems by the Swiss boxer-poet Arthur Cravan and the sequence of prose poems, from The Dice Cornet, by the the Jewish-Breton Max Jacob, who died on his way to a concentration camp in 1944. The contemporary with whom Ashbery feels most kinship is his friend and former companion, Pierre Martory, whose volume The Landscapist he translated in 2008. Where Ashbery often reads like a French poet writing in English, Martory, barely known even in France, has the air of an American poet writing in French. His poem “The Landscape is Behind the Door” not only gives us one of the best lines in this book – “I draw you like a salary” – but reads like a New York School poem that just happens to use French words:

The landscape is behind the door.


The person is there … New York is full


Of similar places where a world,


A large cloud, is being built. Only
The heads stay put. You pay
Before arriving, a long time before
Opening your mouth. There are things
Near us whose sides are all green.

Rimbaud is Ashbery’s guiding figure, prince of the counter-canon as well as the canon, a poet who occupies the centre through sheer force of vision while managing to fill the margins for pretty much the same reason. Ashbery’s version of Illuminations appeared in 2011 with a splendidly ardent introduction: “If we are absolutely modern – and we are – it’s because Rimbaud commanded us to be.” As for the 19th century, there is only one Baudelaire poem here, no Verlaine, no Gautier and none of the Symbolists, save Mallarmé. It’s such a peculiar choice that even the French don’t have a name for the genre it falls into: a series of English nursery rhymes followed by Mallarmé’s own prose translations, re‑Englished by Ashbery with faithful, visionary lunacy, the kind of meaning-promising meaninglessness that makes nursery rhymes so compelling. “Fabulous and fabulously unreadable,” Ashbery concludes, with relish.
Ashbery is a poet of margin-quarrying, tributary-chasing curiosity, but as a translator he is far more accurate than his throwaway comments suggest. It’s as if his very exactness guaranteed his translations their unfamiliarity. This chimes with something in Ashbery’s own poems, which have what he calls, in Rimbaud, a “crystalline jumble”, and where personal pronouns (the I’s and You’s and We’s) on which we hang interpretation, are porous, interchangeable things. Ashbery’s poems track the minutiae of a consciousness that is rangy and unbounded; that, as he writes in A Wave (1984), “belongs where it is going / Not where it is”.
This book begins with versions dating from the 1970s of Jean-Baptiste Chassignet (c1571-1635). Ashbery had by then published, notably, The Tennis Court Oath, Rivers and Mountains and the Pulitzer prize-winning Self-Portrait in a Convex Mirror. This is the period of what he called “the French John Ashbery”, “a temporary phase of troubling the waters so as to be able to fish in them later”. It is a neat image, the poet-translator as fisherman casting his line for a Gallic catch:

Seat yourself on the edge of a wavy


You’ll see it flow in a perpetual course,


And wave upon wave rolling in
thousands and thousands of turns
Release among the meadows its
damp career.

But you’ll see nothing of the first wave
Which flowed once, water changes
every day,
Every day it passes, and we still name it
Same river, and same water, in the
same way.

If Chassignet sounds like Ashbery, it’s not because Ashbery takes liberties, but because he sticks to the original’s unnerving mattness of diction and resists the temptation to freshen up the cliche of Time-as-flowing-river. The result is a sequence of haunting, spiritual and oddly austere poems that seem at once close and far away.

There are many waves in Ashbery, and, more generally, as in Rimbaud, a lot of water. Water is Ashbery’s element; as a poet, he deploys a kind of  liquid consciousness, sometimes slack, sometimes in spate, sometimes a flood and sometimes just a leak, that carries its flotsam of disparate feelings, observations, statements and states of  mind, with apparent indifference to their size, shape and value. “Your form was that of a wave, only more truthful, more circumspect”, writes Jules Supervielle in Ashbery’s version of “To Lautréamont”. “You take the form of a wave so people think it’s all the same to you.” Making pronouns fluid rather than fixed also enables Ashbery to de-hierachise the poem’s different elements, so that an intimation of mortality reaches the reader on the same level, on the same wave, as noticing a fire hydrant or a hot-dog stall. For some critics this just leads to a tricksy poetry of surfaces; for others, it is a way of elegantly rendering the wavy ways we perceive a wavy world.
With many poems in the New York School lineage, the obscure and disjunctive energies of French surrealism become diluted into a sort of decaffeinated whimsy. The effect is like watching André Breton’s Nadja filmed by the makers of Ally McBeal. While Ashbery is not responsible for this, his poems, like Dylan Thomas’s, look easy and temptingly imitable. One result of reading his translations is to realise just how deep-rooted the superficiality of his poetry is.
• Patrick McGuinness’s The Last Hundred Days is published by Seren.
THE GUARDIAN