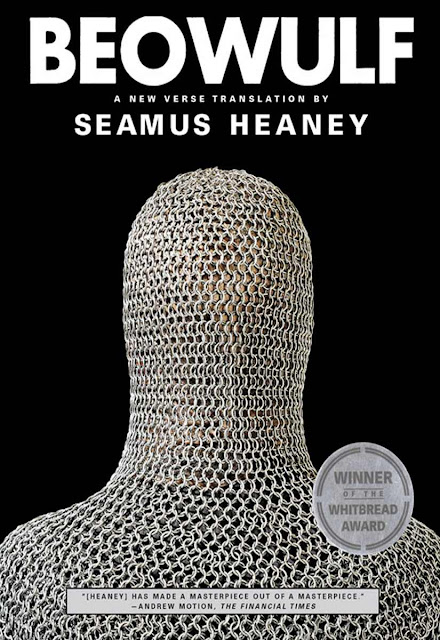 Hrothgar, son of Halfdene, was favoured in war,
and ordered men to build a great mead hall.
It was named Heorot, but a grim demon, Grendel was his name, a descendent of Cain,
a God-cursed brute, struck the hall again and again, grabbed men and butchered their corpses.
One day from across the sea, Beowulf, son of Ecgtheow, came from the land of the Geats, owing allegiance to Lord Hygelac, to help fight this grim demon.
Unferth, son of Ecglaf, being contrary said:
"Are you the Beowulf who took on Breca
in a swimming match on the open sea,
risking the water just to prove you could win?"
Beowulf, Ecgtheow's son, replied, "Friend,
you're letting the beer do the talking.
The truth is this, I'm a strong swimmer,
and although it wore me out I landed safe.
I cannot recall any fight you entered, Unferth,
son of Ecglaf, that bears comparison,
not that I'm boasting."
God-cursed Grendel came, but Beowulf was granted the power of winning, and Grendel gave a God-cursed scream. No one regretted
his fatal departure. Grendel's mother,
monstrous hell-bride, came for revenge.
Alas, Aeschere, Yremenlaf's elder brother and Hrothgar's soul-mate, was killed.
Beowulf, son of Ecgtheow, promised to
avenge the death. The hero went to the lairs
of water-monsters, observed that swamp-thing from hell, a lifeless corpse.
Beowulf cut the corpse's head off.
Hrothgar, elated, praised the Geat:
"Oh flower of warriors, do not give way to pride.
Choose eternal rewards." And so, the grey-haired Dane, the high-born king, kissed Beowulf,
gave him gifts, and Beowulf, glorious
in his gold regalia, journeyed home.
Fifty years passed, as time does. The wide
kingdom, reverted to Beowulf, son of Ecgtheow.
He ruled well, until the treasure of a dragon,
was disturbed. The dragon, was angry, was destructive. Beowulf spoke, boasted
for the last time: "I risked my life often
when I was young. Now I am old."
Time had not taught the son of Ecgtheow.
Beowulf fought and fate denied him
glory in battle. The glittering sword,
infallible before that day, failed him.
Wiglaf, son of Weohstan, went to his aid.
The king dealt the dragon a deadly blow,
but poison suppurated inside him, killed him.
In his final breath, he gave to Wiglaf,
the last of the Waegmundings, his helmet.
With no heir, the son of Ecgtheow, by the son
of Weohstan, was cremated, as ordered.
And if you really are pressed: The digested read, digested
Beowulf, son of Ecgtheow, helps Hrothgar, son of Halfdene, against Grendel, a God-cursed brute. Beowulf gets old, gets killed. Wiglaf, son of Weohstan, cremates him, as ordered.

Posted by Ficciones at Wednesday, December 27, 2017